I must have jinxed myself. Today Gypsy seems like she is ever so slightly favoring her right hind, the one with the bad abscess blowout. I'm going to take some precautionary measures and soak her feet in betadine and Epsom salts tonight. She's been doing so well all winter. I wonder if this has anything to do with the mud that we have now. I bet it does. Time for warfare! I want to be able to use that horse this year!
Posted by neith at 5:30 PM 1 comment: 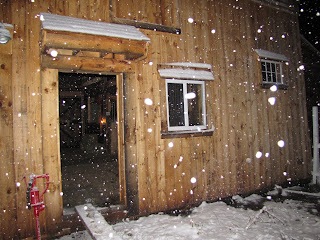 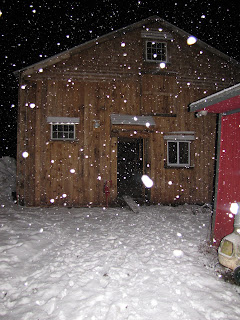 It's snowing again. It was nice for a few days, like in the 70's nice, but the first full day of spring brings us hopefully the last snow of the season. We had a lot of melting and did lose a lot of snow because of it, I'm hoping this storm we're having now doesn't drop too much on us. I don't even have the plow on the truck. 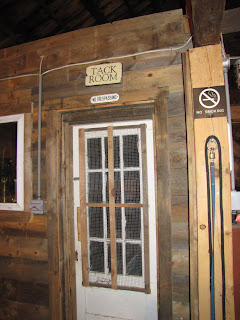 My tack room needs a cleaning. It's gotten cluttered after a long winter. I can't find anything in there because it's all buried under something else. Cleaning my tack room and sorting tack is on my list of things to do. 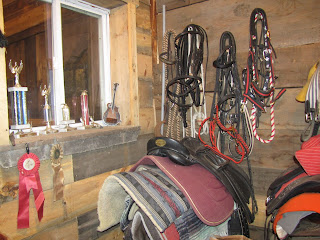 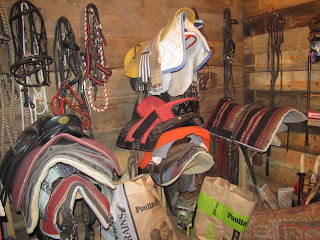 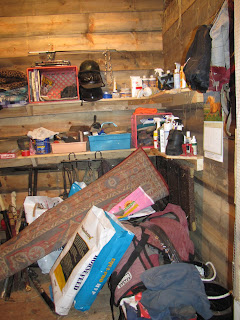 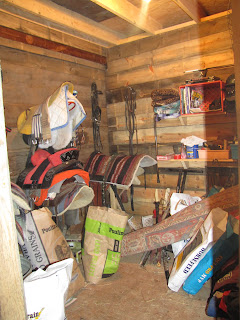 Time to clean out the empty grain bags that I was going to make shopping bags out of (like I can sew, Ha!) and get rid of that damn carpet that for some reason made it in there.

Gypsy is covered in mud. She needs a good grooming, in fact, they both do. 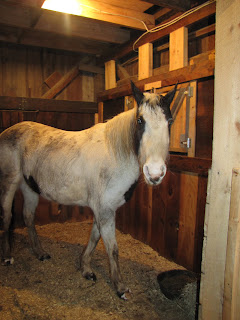 Gypsy has a crack in her right front hoof that I need to keep an eye on. It seems fine now, but I want it to stay fine. Her abscess spot on her right hind is growing out. Other then those few little things, her feet look good. Doodles fronts look a little pancakey to me. The farrier is coming out in a week or two so it will be taken care of. I could call her and have her come sooner, but I don't see why. I think it's just a case of the remission that I just started giving Doodles (Gypsy has been on it since October) making her feet grow faster. 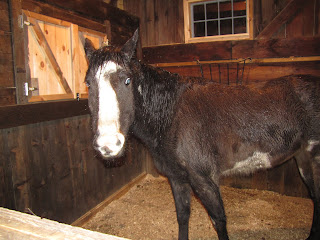 "Oh hai! What do you want?"
I'm a big meanie for keeping the girls out in the snow today. They came in wet and muddy. Poor Doodles looks like a rescue case in that picture. Time to subject both horses to a good grooming session. The winter woolies are starting to shed. Spring is on it's way but winter had to throw this one last punch in.
Posted by neith at 12:58 AM No comments:

Snow and the light bulb moment.

Last Friday we got hit with a big storm. I woke up Friday morning and went out to feed the horses and the first flakes started falling. I didn't know how much snow we were going to get so I went back to bed since I had the day off. I woke up to way more snow then I expected! It looked like we got 8 to 10 inches after it was all said and done! Luckily I put the plow back on the truck before I went back to sleep but since I didn't plow any of the heavy wet snow mid storm, I had a lot to move when I did get out to plow. I got the truck stuck.....twice. The first time I had to call someone to pull me out. There was no way I was getting out on my own. I was trapped on ice and couldn't back up and I couldn't move forward since I had just plowed into a snowbank. I called my local "get me out of trouble" buddy and he hooked some chains up and yanked me out. Then, not even 2 minutes after he left, I got stuck again. I waited until morning and got myself out with lots of digging and cat litter. I was able to finish plowing and get some hay in.

Then after Friday's big storm we had snow and rain on both Sunday and Monday. Tuesday and today have been ok and kinda nice but I know we are going to get hit with some snow and cold later this afternoon. I took advantage of the nice weather today and went outside and played with the girls. I spent some time flagging them around the small paddock. Gypsy could care less about my bag on a stick flag but Doodles on the other hand was worried. She ran away and kept going and going until Gypsy got bored with the running thing and stood next to me while I was waving the flag around. Gypsy had thought that the running was fun but really didn't care about the flappy flag. Doodles then didn't have her buddy running next to her and wasn't sure what to do. Should she keep running? Should she come over and see why I was waving a flag? She decided that she was brave enough to see what I was up to and stood while I rubbed her with the freak flag. Doodles relaxed and realized I wasn't out there to scare them but to give scratches with my scratchy flag. It was kinda neat to see the change over and light bulb moment Doodles had. I'd like to get back into a little training everyday now that the weather is warming slightly. Even if it's something little, I think I just feel better for getting out there and doing something. I was nice being out with them today, My problems just seemed to melt away as I thought about ways to get that horse to relax. Horses are great depression medicine, when I take the time to use them! I guess it was a light bulb moment for both of us.

And now it's snowing, not even an hour ago it was nice and sunny and I was playing with the horses, and now it's snowing so hard you can't see across to the neighbor's house. I'm soooo glad I took advantage of the sun and got out there when I did!! I needed that!
Posted by neith at 3:00 PM 2 comments: